-I can't picture the creature who would want to marry you.
Tell me, who is this unlucky girl? 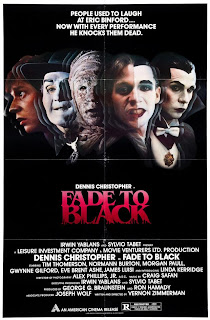 Ahhhh....a movie about a murderously psychotic film geek.  (Yeah, yeah...I saw the Scream movies)  Fade to Black is the story of Eric Binford, a film junkie who gets pushed a little too far by almost everyone in his life. 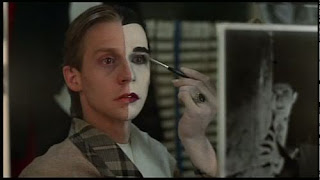 Eric gets dissed by his aunt, his boss, his coworkers, a movie producer and a Marilyn Monroe-esque young tender.  What else can a film geek do but dress up like his favorite movie characters and start murdering? 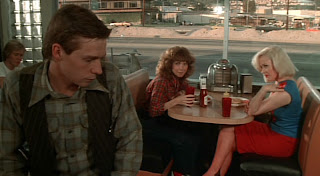 It's not the greatest movie in the world, but I enjoyed it. I've enjoyed it for quite a few years, now.  It was made during a time when being a film geek wasn't really all that cool.  Not like now.  I'm at my coolness apex, right now.  I walk in the club and everyone's like,..."Hell yeah!"  All you film geeks know what I'm talkin' about.  Livin' la vida loca! 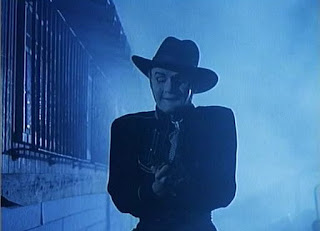 Listen up Hollywood.  You've remade everything else pre-1990.  Fans are begging for this remake.  Well, I am, anyway.
Posted by Deaftongue at 10:48 PM No comments: 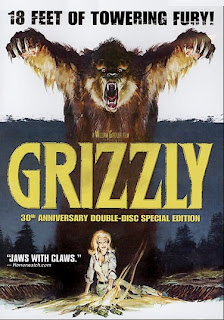 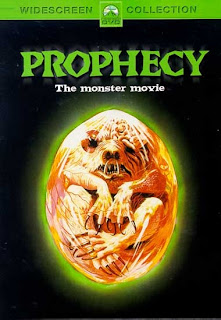 Grizzly (1976)
A 30th Anniversary Double-Disc Special Edition!!!  You are not worthy.  Jaws with claws, indeed.  There's not much to talk about.  It's all right there for you.  Bear kills, bear is hunted down, mankind is saved from the wrath of mother nature.


Prophecy (1979)
If anyone thought John Frankenheimer was at his lowest when he gave the world his remake of The Island of Dr Moreau (starring Val Kilmer and Vito Corleone),...they might be right.  However, never let it be said that Fankenheimer was afraid to scrape the bottom of the barrel on more than one occasion. This time he enlists the talents of Adrian Balboa and Armand Assante.  Corporations are raping the planet for the benefit of mankind (as they are wont to do), mother nature suffers and pays us back in spades. 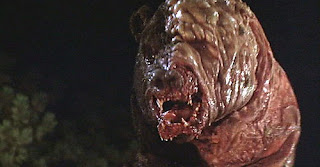 Frankenheimer does his best to give us some rich and sprawling camera work throughout this film.  Yeah, yeah...trees, nature, lakes...(sigh).  Get to the monster, already!  You can fast forward through some of the more artistically inclined shots and shave about 20 minutes off of this gem.

So much fun.  This is what Saturday afternoons were made for.  Enjoy.
Posted by Deaftongue at 11:10 PM 1 comment: 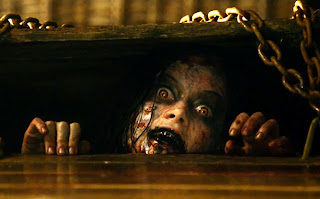 The Last Exorcism II was weak...the first one was better. 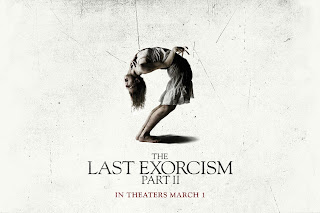 Posted by Deaftongue at 9:32 PM No comments:

-I pray that I may assist you in the birth of a new France where church and state are one.
-Amen.
-...and may the Protestant be driven from the land. 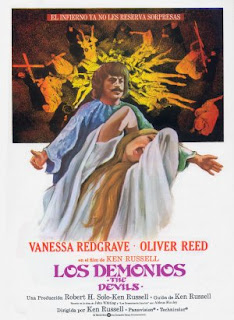 I can sit through twenty or so movies knowing full well that most of them are prolly gonna suck,...as long as I can find that one diamond.  The Devils is that diamond.  And what a diamond it is.

The Devils stars Oliver Reed and Vanessa Redgrave.  Based on historical accounts and heavily stylized, this movie will blow you away.  Reed plays rock star priest Father Urbain Grandier, (The David Lee Roth of The Cloth, if you will...Will you?) in 17th century France.   As the governor of an independent province in France, Grandier does right by his peeps, but to much of the townsfolks chagrin, he loves the sexy time.  Redgrave plays the Mother Superior Jeanne at the local convent and she loves rock n roll.  And by rock n roll, I mean Grandier.  Grandier gets married and Jeanne lashes out by claiming that Grandier is in league with satan and is practicing witchcraft. 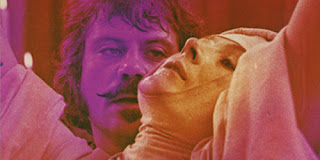 The Church and State seize the opportunity to defame and oust Grandier from his position in order to consolidate their control over France.

Over the top and out of control, this movie would make a great double bill with A Clockwork Orange.  The Devils should be screened second, if that tells you anything. 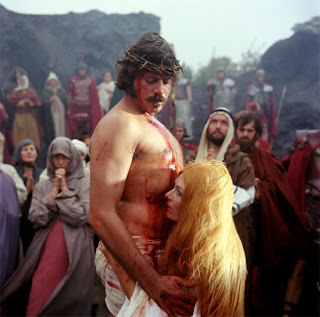 I have a couple of copies of this movie that I "found" on the interwebs.  One is crappy and uncut and the other is pretty good quality and censored.  Watched them both. Good luck finding this one since it's pretty much unavailable other than the edited VHS.

I would resort to witchcraft to see an uncut blu ray release announced.
Posted by Deaftongue at 10:46 PM No comments:

-Cuz y'all chasing me!

I don't actually know what is involved in the process of investigating a crime.  Usually, what we get from most hollywood films ends up being a little too exciting and action packed to be believed.  Sure it's entertaining and makes for great movie watching, but the pros probably roll their eyes when they watch Se7en, Heat or The Departed.  It's kinda like when real boxers watch Rocky.

Having said that, what we get with The Laughing Policeman is probably the most authentic and accurate depiction of police procedurals, short of a documentary, that you will find.  Well, at least what I believe to be an accurate depiction.

Walter Matthau stars in the third of his trilogy of 70's crime films which included Charley Varrick and The Taking of Pelham 123.  Unless you are a huge police procedural head, this will probably be the least entertaining of the bunch for you.  It's got it's draggy wait-and-see parts.  It's got it's dead ends and red herrings.  The slaughter at the beginning is probably the most exciting actiony part.

But wait, there's more.  We get Bruce Dern at his slimy assholey best (this was probably a  preperatory role for his work in The Driver).  The Iron Eagle, himself, Louis Gossett Jr is in attendance.  We get some good old fashioned 70's racism.  The obligatory 70's car chase, which is good to watch for the sake of reference but not so hot on the excitement scale.  Anthony Zerbe!, AND,...a yound tender scantily clad Cathy Lee Crosby for a little ocular pleasure.  That's Incredible!

Slaughter on a bus.  One of the victims is Matthau's partner, who was on vacation at the time. What was he doing on a bus?  Was he following someone?  Was someone following him? How are the passengers connected.  Will Matthau break character and crack a joke?  All this and more will be answered when you watch the ironically titled, The Laughing Policeman
Posted by Deaftongue at 9:07 PM No comments:

-That man has been following us.
-How could he be?  He's in front of us.
-I hope you've got a witty line if he shoots us.

11 Harrowhouse is a british heist comedy.   Or, it's a british heist drama with a few chuckles, depending on which version you watch.  The movie stars Charles Grodin and it has been screened with and without his restrospective commentary which runs the length of the film.  With the commentary (which is the version I saw), you get plenty of Grodin's trademark deadpan observations and narrative, throughout.  Removing the commentary leaves the viewer with a much more serious heist movie experience.

Grodin plays Chesser, a small time diamond buyer/seller who stumbles on an offer that's too good to be true.  He is offered the opportunity to oversee the purchase and cutting of an obscenely large diamond.  During the delivery of said diamond, Chesser gets robbed.  To make things right, Chesser (now a million dollars in the hole) has to pull off a major diamond heist for his client.

The cast in this movie should have guaranteed some measure of success, but we all know that's not always the case.  Candice Bergen, James Mason and Sir John Gielgud all lend the movie a little extra touch of class.  The overall tone of the movie reminds me of Foul Play (1978) with Chevy and Goldie, just to give you an idea of what you're in for.

Overall, 11 Harrowhouse was an enjoyable watch, but i don't think it's gonna cause anyone to rewrite their top 50 movies of all time.  I'd give it a 6 out of 10.
Posted by Deaftongue at 3:57 PM No comments:

This goddamn city is dying all over.  It's drying up like a corpse, sections are choking to death.

Man, what a great flick!  The Nickel Ride stars Jason Miller as Cooper (The Key Man), a mid level mob boss who is on the verge of securing a block of empty warehouses which the LA mob will use to house stolen goods.  He just can't seem to get all of his ducks in a row.

This movie reminds me a lot of The Friends of Eddie Coyle.  You've got your main character doing everything in his power to get over this last mid life mob hump and he's just not getting the right cards for a winning hand.  Father Karras does such a great job of conveying the concern, worry, distrust and paranoia that comes with having to deliver for the mob and fearing the cost of failure.  As the movie moves forward, you really get the sense of dread and mounting tension as Cooper starts to run out of time.  What gives the film an extra boost is that you're never really sure if Cooper's concerns are real or imagined.

Bo Hopkins good ole boy character really shines against Millers stoic and intense character and their exchanges are highlights of the film.  Also stars Linda Haynes, Victor French (almost unrecognizable sans facial hair) and John Hillerman.  Really well done and deliberately paced, it was great to finally get to watch this one.  (Merry Christmas to me!)

Posted by Deaftongue at 3:44 PM No comments:

I'm a big fan of movies. I'm putting this blog together for my own entertainment. I'm not a professional writer. I'm gonna post pics, "reviews", "editorials" and anything else that seems cool to me. I'll probably post some TV stuff, as well. Enjoy!